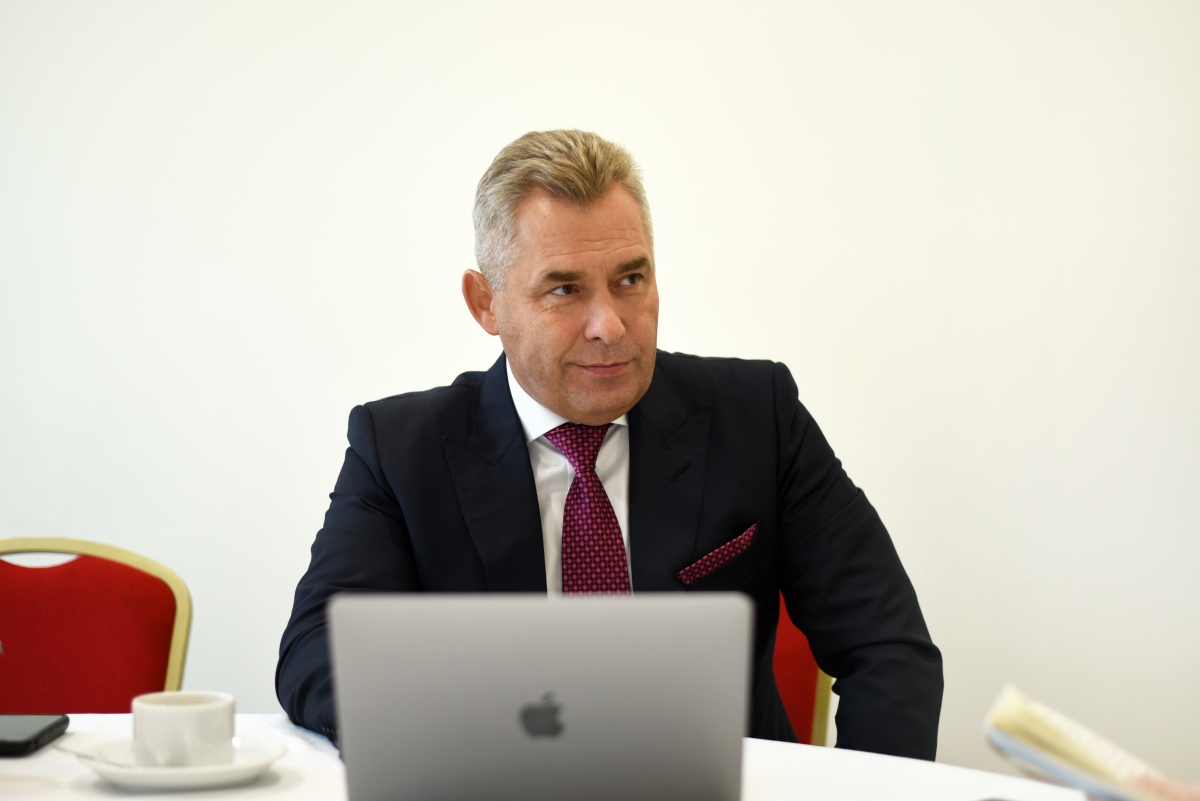 At the forum of “How to reduce taxes and secure business in 2019”, editors of “Rusbankrot” managed to talk to the event’s speaker, one of the most recognizable and entitled lawyers in the country, Pavel Astakhov. As part of the conversation, he expressed his position on one high – profile bankruptcy case, commented on the initiative of the Ministry of Economy and also raised a question of holding unscrupulous inspectors accountable and the question of the need of legal education for school students.

Good afternoon, Pavel Alekseievich. Recently, a precedent happened in the Chelyabinsk region - a seizure of property of one lawyer who was conducting a bankruptcy case. What is your opinion about it?

P.A.: Serious changes took place at the end of 2016. The Plenary of the Supreme Court introduced such a notion as a person, responsible for the debtor’s control and described the cases when such a person might be hold accountable. This sets up a completely different regime of legal existence for those who are engaged in the area of business.

In this precedent, it is worth noting that the tendency has been observed for several years already. Both attorneys and lawyers might be hold accountable for. Here the lawyer Votinova was hold accountable as a person, controlling the debtor (further here – PCD). As I remember, one of the creditors submitted an application on bringing her to subsidiary liability as he regarded Votinova as a PCD. The Chelyabinsk Arbitration Court on August 19, 2019, in response to Votinova’s application about the removal of interim measures, refused on formal grounds, since he considered that an application had been filed to bring her to subsidiary liability by the proper party of the dispute. Her status as a status of PCD became a subject of examination. Votinova, as the Court thinks, didn’t prove that interim measures limit the right to own and use the seized property.

According to the common rule, a necessary condition of being a PCD is his/her having an actual capacity to give binding instructions to the debtor or otherwise determine his actions. This side will be examined as the process has not yet been completed. Do you think the precedent created might affect the security of the legal community?

P.A.: It doesn’t affect the security of the legal community in general, it is a question of practice. Here the plenary emphasized two very important things. First, it indicated the grounds for exemption from such liability. It means that the persons who are regarded as a PCD should prove the integrity and reasonableness of their actions, their innocence.

Another important thing is that the company might have accused Votinova itself. It means that the person who is hold accountable for, was responsible for loans and was an authorized person, was signing the documents and was engaged in activities - so now this person has a right to declare that he or she is a chairman. And then the person says that he or she was led by other people. That is what actually happened to Votinova, other people might have pointed at her. I analyze the situations when lawyers are accused in aiding in committing the crimes. For example, an enterprise lawyer is discussing a possible tax evasion scheme. The leading manager sets him the task and the lawyer says what exactly can be done. Manager says: “Ok, let us choose this scheme”. But what if this scheme is “grey”? And there are cases when the investigative committee holds this lawyer accountable for ‘intellectual aiding”.

Or if lawyers take part in the negotiations when a merger or acquisition take place. And if they hear, for example, some kinds of threats? After negotiations, a person to whom the threats were directed, writes a letter of application to investigative committee. Then the staff members come and say that here they have an organized criminal community with a head of it and with the lawyers and managers together. They all tried to take another person's business. And this is raiding, extortion, fraud. The lawyer is an accomplice. Such a practice is taking shape, and it's scary. The story of Votinova is just a small fragment, it relates more to the situation with the PCD.

Now the Ministry of Economy is preparing an initiative, according to which Russian citizens will be able to redeem their debts from the banks. Do you think this might lead to the total loans non-payment?

P.A.: This initiative, of course, has not yet been implemented. I do not think that this might lead to a total non-payment of loans, because the sale of claim rights under a loan agreement is a right, and not a duty of a bank. If they had just passed a law that would oblige, first of all, to offer the debtor to redeem his debts himself, that would be a different story.

If the bank makes an independent decision to sell the debt at a substantial discount, the change of buyer does not affect the amount that the bank will receive for the sale of claim rights to the third party or the debtor himself.

The bank's provision of the debtor's right to repay the debt at a cost to third parties may reduce the general level of the population accounts payable.

By the way. Gref (Ed. Note: President of Sberbank) called this idea strange. Then German Oskorovich himself commented on his words and noted that one of the main banking rules is to never sell debt to the debtor himself.

At the forum "Control, supervisory and licensing activities in the digital age" you talked about the need to practice holding accountable unscrupulous inspectors. Is there any progress in this direction?

P.A.: It is difficult, inspectors are difficult to hold accountable. Here, basically, the problem of the ambiguity of proving the groundlessness of the initiation of inspections, compliance with regulatory requirements. This requires the creation of a mechanism for determining methods of responding to violations of relevant requirements. This mechanism has not been created yet.

There was a discussion, I was opposed by Anna Yuryevna Popova, head of Consumer Protection and Human Welfare. I mentioned them as an example of overrequirements. I spoke about strange State Standards and Health regulations and standards, which, for some reason, still exist. For example, a dairy factory, they required gauze bags. And gauze bags have not been needed for the production of cottage cheese for a long time already. Anna Yurievna was upset and said that they themselves regulate and clean the Health regulations and standards. But Consumer Protection and Human Welfare is ahead of all in the number of inspections.

There are following results. Based on the results of the public hearings that we held, a draft federal law on mandatory requirements is currently under discussion, which provides for the gradation of the degree of risk of violations and requirements depending on the nature of the consequences of their violations. We should understand how dangerous the violation is for the future of the entrepreneur, for his business and his company.

What is the logic? Before asking and demanding, it is necessary to explain. It is also an opportunity to compare the requirements that are presented to you with the manual that the government body itself issued. There must be rationality and justice in everything.

After your comments about the gauze bags, were there any actions taken?

(editor's note: in accordance with Health regulations and standards 2.3.4.551-96, marked as “existing”, the gauze bags are still here).

If the point is already set to the end, then we have over 40 supervisory authorities, at least 42. More than two hundred forms of control and more than 2 million mandatory requirements. If you present 2 million requirements to an entrepreneur with the help of 200 possible control options, with the help of 40 inspecting organizations, then please be kind enough to publish manuals and explanations in these forty departments.

Tell us about your program “Legal educational program” for students. Are there any results?

The program has existed for a very long time, I started it in 2007, when my series of books "For Children About the Law" appeared. From that moment, enlightenment activities began, and the Pavel Astakhov Legal Center was created and it still exists at our Bar association. For several years, our lawyers in the legal education program have been making speeches and continue doing it at Moscow schools.

When we talk about the effects of enlightenment, then we can talk about them only after generation grows up. I spoke back in 2007 when I was asked about the recipe for a law-abiding society. My answer is very simple - to raise three generations of people who at least know the Constitution, their rights and obligations. There are four direct duties in the Constitution for men and three for women. Indirectly taken, there are only eight responsibilities. And more than 40 articles of rights. But we do not know them all.

Imagine if we raise children who clearly know their rights and their responsibilities in the 4-5th grade. It is not difficult, the Constitution is not a very voluminous document. A person will grow up with a completely different understanding of the world and in completely different coordinates.

He or she will no longer be frightened by a policeman who comes up to him and begins to speak rudely. A citizen will answer: “Why are you talking to me like that? I have a right, there is a presumption of innocence, what are you accusing me of? Introduce yourself, say, who you are. You are being kept at my expense, not me at your expense. ”

Imagine how one generation, second and third grew. And all three generations are those who exist simultaneously.

It means that we have to wait for results somewhere by 2070?

P.A.: I think this could have been achieved much faster if there was not only lawyer Astakhov, who was involved in legal education. At one time, Dmitry Anatolyevich Medvedev raised a very serious question, everyone believed, and the Bar Association was created at that very moment. I was in the first working group. When the “Court Hour” program existed, there was a free consultation line, and we were answering thousands of questions by telephone. When I showed Medvedev a report, he was surprised - 50 thousand consultations per year. This is only by means of one of our legal centers. And if you obligate all lawyers, and if you obligate any legal organization to give advice for free and in a certain volume? As Anatoly Alexandrovich Sobchak said: “The duty of a lawyer is to educate your own people.” I agree, I proceed from this.

Since I am a lawyer, I give legal advice for free and do not look at the clock, as in America.

On December 8, the Liquidation and Bankruptcy Bar Association will hold the “All-Russian Legal Online Quiz”. Free participation, but with expensive prizes for an unlimited circle of users. Don’t you want to make your own special question from Pavel Astakhov?

P.A .: With pleasure. I will make not only a question, but also a prize - a collection of my books.